Tutorial Mode: what the...? 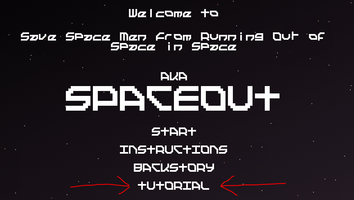 I thought I would share this as the "Tutorial" option on the main screen may not be what is expected... 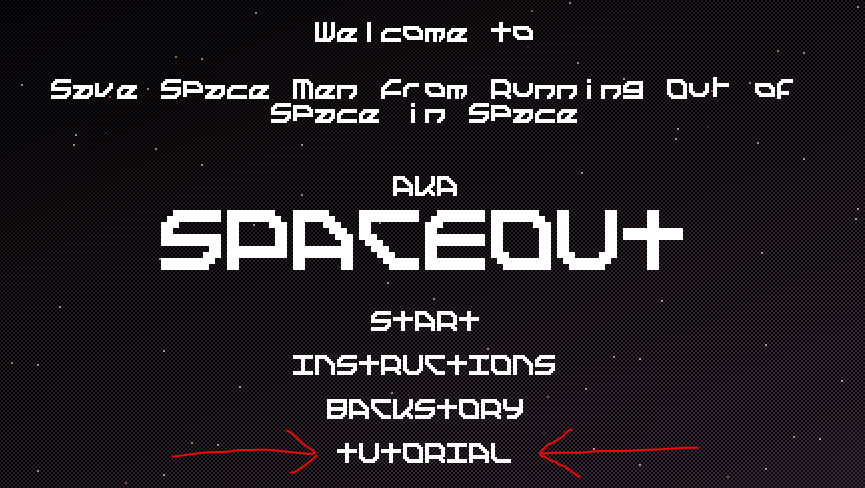 What is the Tutorial Option?

The tutorial mode is basically exactly the same as the normal mode except you can't die.

To name all the differences:

What is the tutorial good for?

Sometimes it gets frustrating when playing a new game to die/lose when you are still figuring things out.  This version eliminates the chance of losing and lets you learn and experiment freely.

Most importantly though, it will give you an opportunity to figure out how portals work...

How do you get out of the tutorial?

Since you can't die in the tutorial, it may seem to never end.

The only way to get out of the tutorial is to enter a portal, which is a very important mechanic that isn't well explained elsewhere.

What is a portal?

A portal returns your ship back to the hangar and opens up the upgrade/select ship menu again.

Returning to the hangar allows your ship to unload all the space men you pick up which gives you points and money.  Your ship has a limited capacity of spacemen it can carry so you have to return to the hangar via a portal frequently.

With that money you collect you can upgrade your ships by clicking the green arrows next to their stats.

So if you don't figure out the concept of the portal then you are missing out on a lot of the game!

How do I open a portal?

If you run into the portal brick your ship crashes and explodes.  It has to be opened first.

To open a portal you have to bounce your balls off it three times.  This can be the same ball deflected back at it or three different balls.

Lasers have no effect on portals.

After three bounces the portal open animation starts.  The portal isn't "open" until that animation finishes (I did that on purpose...probably a bit too harsh, hehe)

NOTE: the power bricks will destroy a portal, open or closed, if in the row/column of destruction.  So if needing to get out then watch where your balls are flying!

Why aren't there tips in tutorial mode?

Tutorial mode isn't exactly what it was envisioned to be.  After all, this was for a weekend long game jam.

I should have re-named it practice mode as it isn't really a tutorial, but it was near the end when everything was chaos.  Don't forget there is an instructions screen and hopefully it helps new players a bit: 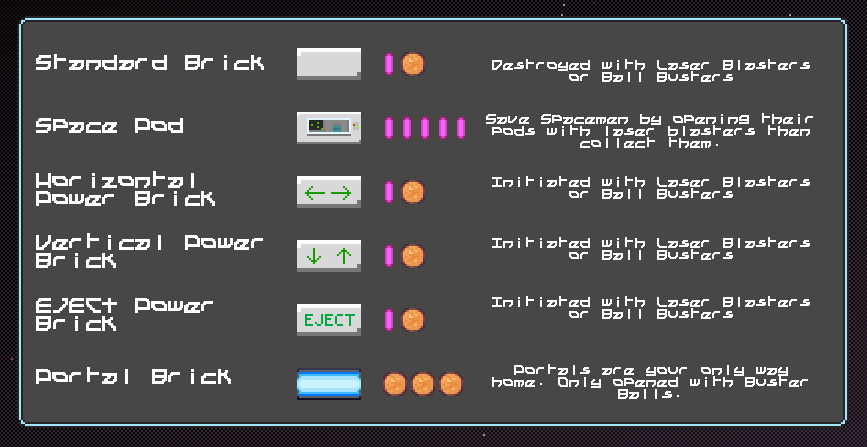 I basically only had to add one variable of 'tutorialMode' and have it checked in a few places (on collision, upgrade menu creation, after entering a portal).  So this was a really cheap and easy thing to create.  It isn't perfect but I figured if a new player is getting frustrated it is a good option.  You can also test out the collision borders of different objects to help you fly in close quarters.

...and you can swing your mouse around crazily and watch all the destruction!

Let me know if any additional questions on tutorial mode or portals!

Save spacemen and juggle your balls!